TCI Rechtsanwälte > IT Contract Law and Out­sour­cing > Long-time of counsel of TCI, an IT law focused firm, joins as full partner

Long-time of counsel of TCI, an IT law focused firm, joins as full partner

Shortly before its 10th anniversary, the Mainz team of the law firm TCI has been strengthened with the experienced in-house lawyer and former general counsel Sabine Brumme as a full-time partner as of May. As a founding member of the firm, she was previously of counsel at TCI and will join the firm in full in the future. Previously, Sabine Brumme was General Counsel at the innovative AI provider arago GmbH and Deputy General Counsel at an international consulting firm.

Brumme started her legal career in 1997 at a savings bank association and was already active in IT and Internet law at that time. This continued at Bayerische Landesbank. She then spent more than 15 years at the consulting firm BearingPoint in various positions and held the position of Deputy General Counsel with legal responsibility for the software division there together with her team. In 2019, she moved to arago a provider of AI-powered cloud applications.

In addition to legal operations, her focus was on IT law, which she has been involved in since the beginning of her professional career. Brumme is experienced especially in complex, international negotiations of software, outsourcing and cloud contracts. In addition, she has been intensively involved with LegalTech in recent years.
Brumme has been associated with TCI for a long time: She is a founding partner of TCI and also previously worked with parts of the Mainz and Munich teams as of counsel at teclegal from 2009.

She has been a guest lecturer for the Institute of Information Law at the h_da University of Applied Sciences in Darmstadt and has supervised Bachelor and Master students there as well as at the Frankfurt University of Applied Sciences in the course of their final theses. She continues to be associated with the h_da through her work on the advisory board of the Institute for Information Law. She also sits on the advisory board of the “Intellectual Property Magazin”.

Brumme will support the team in the areas of IT law, data protection, international contract law and competition law. She will also expand the LegalTech, Legal Operations and Legal Outsourcing practice areas. She will build on existing international mandates.

Stephan Schmidt, TCI founding partner comments on the change: “We are very pleased that our long-time companion Sabine Brumme has decided to support us in the future as a partner with all her strength in the exciting subject area of IT law and to contribute to the fact that we can continue to advise our clients at the highest level, especially in the area of licensing and outsourcing.”

TCI is represented as a group of law firms with 14 partners and 3 associates at the offices in Berlin, Mainz and Munich since 2011. TCI’s industry focus is on “Technology”, “Communication”, “Information”, on which the short name and brand “TCI” is based. The legal focus is on technology-related contract law and litigation including arbitration, IT law, telecommunications law, public procurement and antitrust law, franchise and distribution law, employment law, copyright law and intellectual property law. 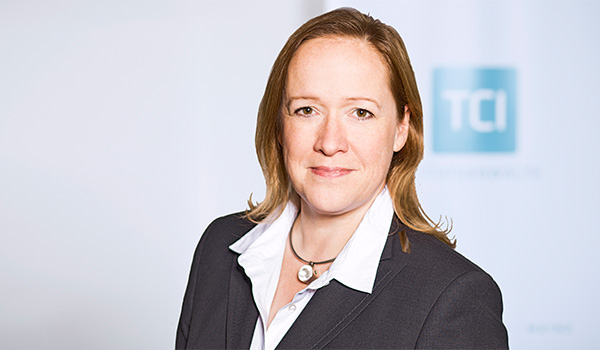